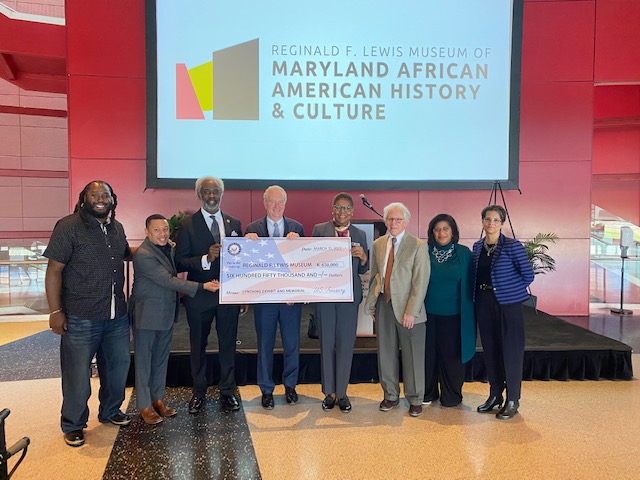 BALTIMORE, Md. (June 15, 2022) – The Reginald F. Lewis Museum of Maryland African American History and Culture (The Lewis Museum) and the Maryland Lynching Memorial Project (MLMP) today announced an agreement to partner on the conceptualization and design of an exhibition to honor the memory of Maryland victims of racialized terror. Planning and construction on the Maryland Lynching Memorial Project at the Lewis Museum is estimated to take 18 months with the design process for the project slated to launch this fall. A memorial to the victims will also be erected on the museum’s grounds. The project is all part of a broader set of facilities improvements planned for the permanent exhibition. The capital campaign will officially be launched later this year and completed in time for the celebration of the Lewis Museum’s 20th anniversary in June of 2025.

In announcing its plans, Executive Director Terri Lee Freeman shared that “The Lewis Museum wants to provide a permanent acknowledgement that these crimes against humanity occurred while we honor the memory of the victims. We recognize that true reconciliation requires remembrance and reparation.” The permanent exhibit and memorial will work to both educate visitors about unjust acts of vigilante justice and honor the memories of those lost to this horrific violence. It will also bring light to the fact that modern day acts of racial violence and terror continue. The memorial will be the only state-wide remembrance of its kind in the country to date.

“The installation will establish the irrefutable truth about the history of racial terror in Maryland,” said Will Schwarz, President of the Board of Directors for the Maryland Lynching Memorial Project. “It will also help visitors understand how the legacy of lynching continues to weaken and undermine our democracy today and how we can dismantle the machinery of white supremacy that undergirds this history.”

In April, U.S. Senator Chris Van Hollen (D-Md.) announced a $650,000 federal investment in the curation of the state’s first exhibition addressing Maryland’s difficult history of lynching. The museum’s plans are in direct response to a proposal from the Maryland Lynching Memorial Project, a nonprofit organization that has worked to uncover the truth about extrajudicial incidents of lynching throughout the state. MLMP’s research played a significant role in Governor Larry Hogan’s (R-Md.) posthumous pardoning of 34 victims lynched between 1854 and 1933. It also advocated for the creation of the Maryland Lynching Truth and Reconciliation Commission which entered into statute with passage of House Bill 307 in 2019 and is the only such commission in the United States. The Lewis Museum and MLMP are committed to working closely with Maryland Lynching Truth and Reconciliation Commission, families of lynching victims, community members, and local advocates in counties across the state in the development of the memorial and exhibition.

The exhibition will chronicle the use of lynching as a tactic of intimidation, illuminate the human lives and the faces behind the names of the victims, move toward reconciliation by providing this information, and encourage visitors and others to continue the pursuit of repairing the breach left in African American communities by this type of violence, often sanctioned by the state.

About the Reginald F. Lewis Museum
Located two blocks from Inner Harbor in Downtown Baltimore, the Reginald F. Lewis Museum of Maryland African American History & Culture – a Smithsonian Affiliate – documents, interprets, and preserves the complex experiences, contributions, and culture of Black people. It serves as a catalyst of sustained change by providing robust programs and exhibitions and bold conversations that educate and challenge. Founded in 2005, the 82,000-square-foot facility accommodates over 13,000 square feet of permanent and temporary exhibition space, hosting more than 11,000 objects in our permanent collection, special exhibitions, educational programs, and public events. For up-to-date information regarding programs and exhibits and to plan your timed admission, visit www.lewismuseum.org, or follow us on Instagram and Twitter at @LewisMuseum or on Facebook @RFLewisMuseum.

About the Maryland Lynching Memorial Project
The MD Lynching Memorial Project, Inc., founded in 2018, is a 501(c)(3) non-profit organization that seeks to advance the cause of racial reconciliation in our state by documenting the history of racial terror lynchings, advocating for public acknowledgement of these murders and working to honor and dignify the lives of the victims. Additional information about MLMP and affiliated county coalitions can be found at www.mdlynchingmemorial.org.