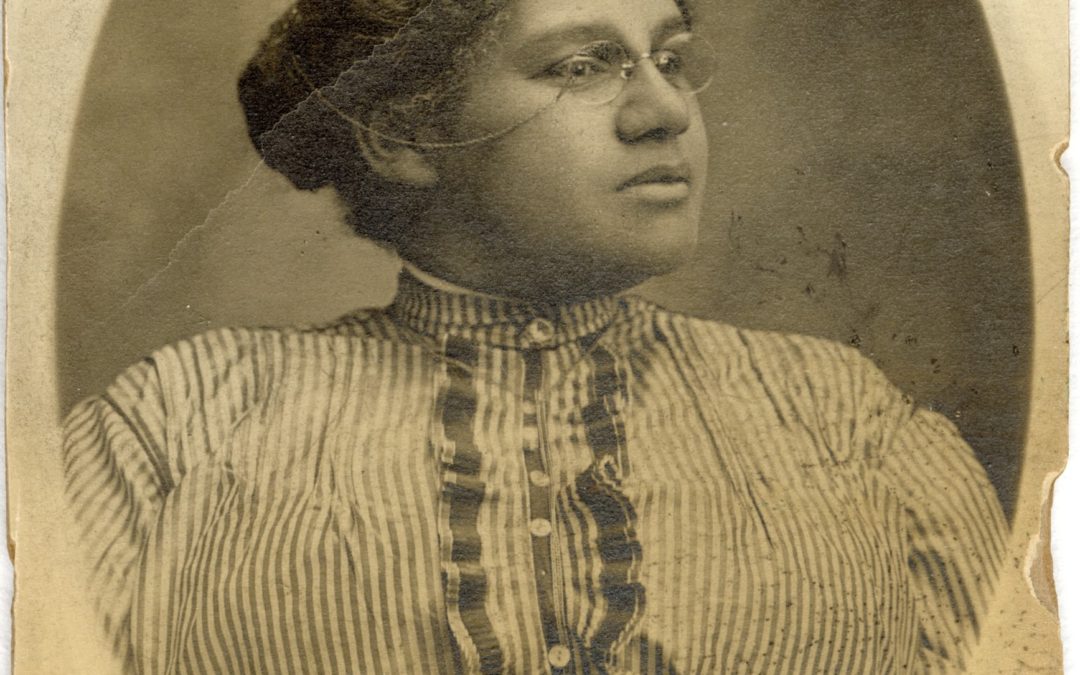 Ida Rebecca Cummings was actively involved in clubs and other public programs in Baltimore. From 1910 through 1916 Ida R. Cummings was the Correspondence Secretary for the National Association of Colored Women’s Club (NACWC). In doing her work for the NACWC she traveled out of state for their annual meetings and wrote over 700 letters! Starting in 1916 she became the Vice President of the NACWC. In her time working for the NACWC Miss Ida would have met Mrs. Margaret Murray Washington, Miss Hallie Quinn Brown, Mrs. Mary Burnett Talbert, Mary Mcleod Bethune, and many other prominent black women working for a better future.

Ida Rebecca Cummings was born on March 17, 1867 in Baltimore City. Between 1871 and 1898 Ida R. Cummings’ family moved from 45 Tyson Street to 295 Eutaw Street to 424 W. Biddle Street before the family settled into a row house at 1234 Druid Hill Ave where Ida lived until her death in 1958. The same house later known as the “Freedom House”, was torn down in 2015. In its later life the “Freedom House” was the office for the local NAACP organization.

At the time Ida R. Cummings was living at 1234 Druid Hill Ave, the house was always full of family. In 1900 Ida lived with her parents Henry and Eliza Cummings and five of her siblings Aaron, Blanche, Harry, Estelle, and William as well as her Aunt Charlotte and Uncle Charles Davage, who are noted as living with the family from the 1880s through the end of their lives. The rest of this post delves deeply into the life of Ida R. Cummings gleaned from newspapers, state records, and city directories. It is important to picture her life at home, away from these public sources, as surrounded by family. Later in life, she’ll live in the same house with different family members – nieces, nephews and sisters-in-law – but the house is always full.

Ida R. Cummings was known as Miss Ida by her students. She was the first black kindergarten teacher in the Baltimore City school system, and possibly the first black kindergarten teacher appointed in Maryland. She graduated from the Baltimore Kindergarten Training School Association, and also studied at the Chicago Kindergarten College before graduating from the 1922 class at Morgan College. Miss Ida started teaching as early as 1897, as noted in the R.L. Polk and Co.’s Baltimore City Directory, but this directory does not list Miss Ida’s school. From the First Colored Professional, Clerical and Business Directory of Baltimore City from 1914 through 1932 it is possible to trace the schools where Miss Ida worked. She spent the most time (1914 through 1927) working at School No. 112 at Calhoun and Lauren St. In 1920 she seems to have worked at both School No. 112 and School No. 113 – the Robert Brown Elliott School. At the end of her career, starting in 1928 through at least 1932, Miss Ida worked at No. 122 Samuel Coleridge Taylor School. Miss Ida retired from teaching in 1937.

In her local community Miss Ida was the President of the Colored Fresh Air and Empty Stocking Circle from 1919 through 1941, possibly as early as 1908. The group was organized by Miss Ida’s mother, Eliza Davage Cummings, in 1907. They would raise money to give children Christmas stockings when they would not usually be able to have a Christmas. The Circle also recognized early on that the living conditions of the children contributed to their illnesses. The Circle bought a 10.5-acre farm where they would take children in summer. Miss Ida was instrumental in raising funds for the Colored Fresh Air and Empty Stocking Circle for more than 20 years.

In 1929 Miss Ida joined the Frances Ellen Watkins Harper Temple No. 429 of Elks. She one of the founding members of the F.E.W. Harper Temple as it was founded October 23rd 1929. From 1929 until her death Miss Ida Cummings served as the Daughter Ruler of Temple No. 429. In 1937 she was elected Grand Assistant Recorder and in 1940 became the first Marylander conferred with past granddaughter ruler honors which included a place on the executive board, an office she held until her death.

Miss Ida was active in many more clubs and organizations. She was so highly regarded that Governor Harrington (1916-1920) appointed her to be chairman of the Woman’s Section Council of Defense at the beginning of World War I in 1918. Around this same time Miss Ida was President of the Woman’s Campaign Bureau of the Colored Republican Voters’ League of Maryland. Later in her life, after she retired from teaching, Miss Ida was appointed by the Governor to be on the Board of Managers for Cheltenham School for Boys, a reform school in Baltimore founded in 1870. She was on the board from 1939 through at least 1944.

In 1939 Miss Ida Cummings was the first woman to be on the Board of Trustees of Morgan College. She was also on the Board of Trustees for the Bennett College for Women in Greensboro, N.C. Clearly her success as a leader of numerous clubs both local and national as well as her personal interest in teaching made her an easy choice for trustee at both of these institutions.

After her death in 1958 the contents of her will were published in the Afro-American Newspaper. Her generosity to charitable causes continued after her death, she donated one hundred dollars to the following institutions F.E.W. Harper Temple of Elks, Provident Hospital, Morgan College Christian Center, Bennett College for Women in Greensboro, N.C., and N.M. Carroll Home for the Aged. She also left money to her family members. In her will she asked to be buried with three pieces of jewelry two pins given to her by the faculty at Schools No. 122 and 112 as well as a diamond ring given to her by delegates of the F.E.W. Harper Temple.

In the collections here at the Reginald F. Lewis Museum of Maryland African American History and Culture we have several archival documents relating to Ida R. Cummings’ life, including two photographs and about 50 postcards sent to her between 1906 and 1910 from friends all around the country, including the Territory of Hawaii! Our collections also contain documents relating to Ida R. Cummings’ family including keepsakes, photographs of other family members, and notes on the family genealogy done by descendants of Ida’s siblings. The pictures used in this article all come from our collections, please follow the links below each picture to visit the object page and explore the collection in more depth.