I Got A Monster: Virtual Book Discussion 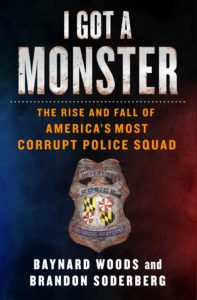 You’re invited to a virtual book discussion with authors, Brandon Soderberg and Baynard Woods, about their new book, I Got a Monster: The Rise and Fall of America’s Most Corrupt Police Squad. Soderberg and Woods will be joined by Ivan Bates, former prosecutor turned defense lawyer, and moderator Tia “Mz Konnoisseur” Hamilton, owner of State Vs Us Magazine & co-owner Urban Reads Bookstore. Free for members; $5 non-member.

Beginning in the wake of the Baltimore protests over Freddie Gray’s death, I Got A Monster, is the explosive true story of the Gun Trace Task Force (GTTF), America’s most corrupt police squad. For half a decade, members of this elite unit terrorized the embattled, deeply-segregated city of Baltimore, robbing dealers of their cash, stealing their stash, and putting the drugs back onto the streets.

Buy your copy of I Got A Monster at Urban Reads.