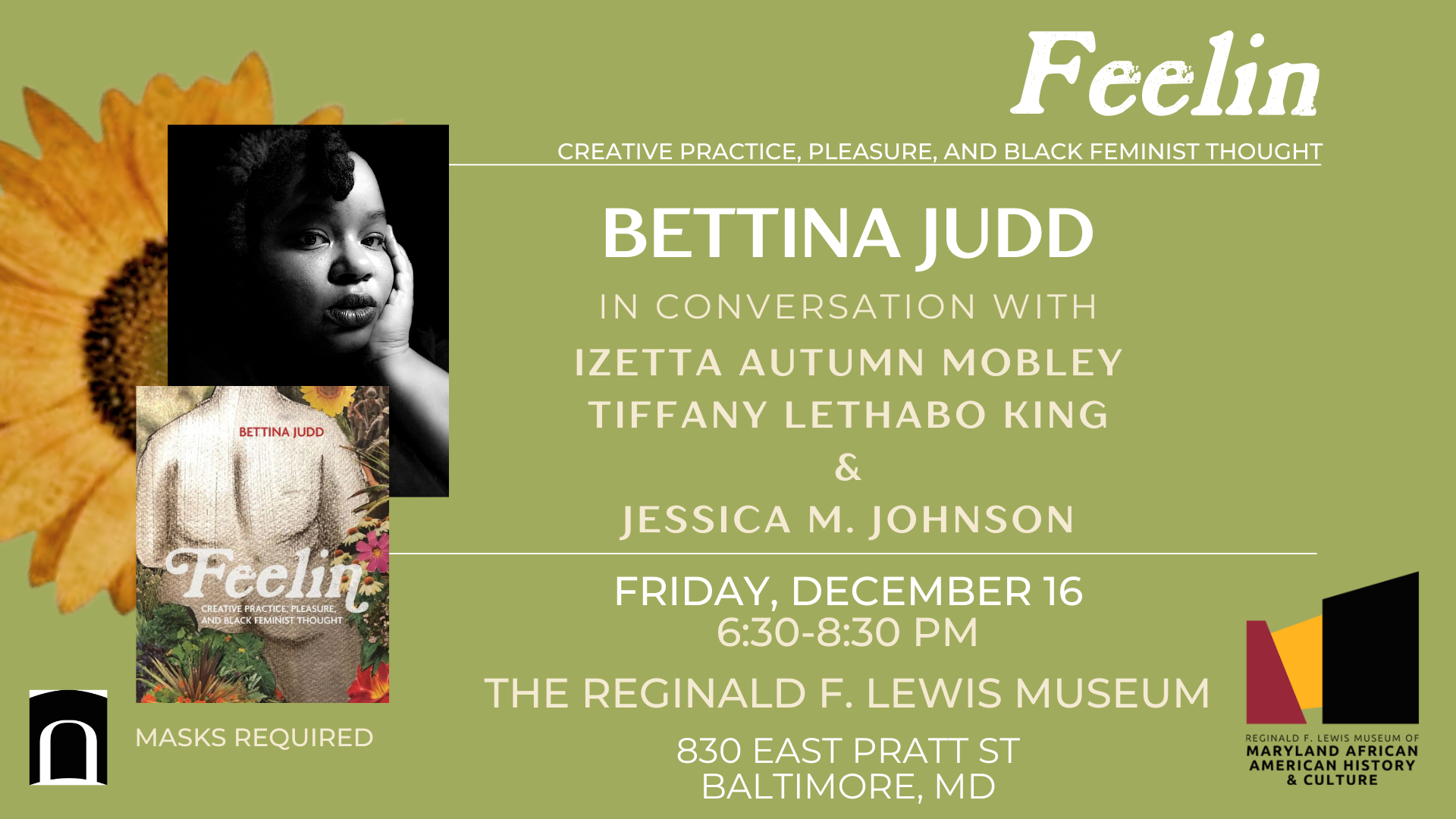 Feelin: Creative Practice, Pleasure, and Black Feminist Thought (Northwestern University Press, December 15, 2022),  is a timely work that contextualizes Black women’s interiors and demonstrates how Black women’s creativity and “feelins” are critical landscapes for revolutionary thought and theory. This urgent work intends to “name the ways that racism and sexism is felt, and thus creative responses to those experiences must also be felt.” Judd expertly interrupts the impassive academic research tradition by opening lines of communication on each page between Black women artists. Lucille Clifton’s, Aretha Franklin’s and Alexis Pauline Gumbs’ voices speak through the page alongside the voices of Renee Cox and Avery*Sunshine. Their genius and joy are woven expertly together with Judd’s own poetry, art, and academic thought.

Bettina Judd  is an interdisciplinary artist, performer, and writer whose creative research centers Black feminist thought. She is the author of patient., winner of the Hudson Prize from Black Lawrence Press, and an associate professor in the Department of Gender, Women, and Sexuality Studies at the University of Washington and is from Baltimore.

Praise for Feelin
“Bettina Judd brings to academic theory and criticism what Stephen Henderson suggests Black poets bring to poetry in their ‘attempt to speak directly to black people about themselves.’ I am certain that Judd’s Feelin: Creative Practice, Pleasure, and Black Feminist Thought is a book with which scholars and poets and all other kinds of writers and artists will have to contend long after Judd herself has written her last word. What I love most about this book is how Professor Judd proves her theories with her own art, be it poetry or video production or song.” —Jericho Brown, author of The Tradition

“Bettina Judd’s attention is to black feminist thought, creative process, the feel of things, our needs, and all of the ways that bodies know. In Feelin Judd takes us deeply into grief, joy!, anger, and ecstasy as the matter of Black study. This is an embodied black feminist poetics, an imaginative labor of knowledge, pleasure, vulnerability, and care.” —Christina Sharpe, author of In the Wake: On Blackness and Being

“Feelin touches Black women’s arts from the inside parts and excavates its ways and means. Its exquisite craft and searing intelligence documents Black womanist aesthetics. Perhaps the critical text in contemporary womanist studies, Feelin is archive and practice, gallery and form . . . a documentary of how we do arts, endure and expose sciences, and still compose and create from the graceful space of extraordinarily generous and gifted spirits. This is a sacred gallery. Be still and take your time with Judd’s incandescent Feelin.” —Karla FC Holloway, author of Passed On: African American Mourning Stories and Gone Missing in Harlem: A Novel (TriQuarterly)